Never Finish Wondering, “What Could I Have Done?” ). He is a proven, self-made, and practicing salesman. When you read or listen to Mr. Mackay you know you are getting tested advice.

This morning’s newsletter brings another gem–Coasting towards apathy.

You might be saying to yourself, “Bill, no one in this market is coasting. We are all trying to survive!” I am going to contend that they are both one-and-the-same, just positioned at different points in the business cycle.

Coasting in Good and Bad Times

Coasting can creep in at any time, good or bad. In good times it is the apathy of money, in bad it is the loss of hope. Regardless it leads to bad endings–often unexpected ones.

The secret to avoiding coasting is to practice intensity.

It is hard to maintain, but you will see world class athletes using that edge all the time. Michael Phelps won the 100-meter butterfly because Cavic was gliding and he was in a final stroke. This was Phelps signature event, but he was swimming like someone could beat him. It was a good thing, because someone almost did.

Chris Gardner was a multiple-time failure, but he never coasted to what would seem a natural oblivion. He opened his eyes and looked for successful models–then he got intense.

Jeffrey Gitomer holds a place in my mind for how to build intensity in bad times–“Fail Faster!”

What could I have done?

You have to figure out that balance, but my trick was to figure it out in the middle. Your competition is your benchmark. You can see them and you know where you want to be. The tough part is when you are in the lead, setting the pace. In this position, coasting kills. You are letting your competition rest for the finishing kick, while you are emptying your tank. So, if you are going to take the lead make sure you are emptying the other people’s tanks faster than your own.

And for heaven sakes, never win coasting and be left with the–“What could I have done?”–question:

Even in winning, people can coast. For example, I remember being at last summer’s Olympic Games in China at the men’s 100-yard dash final. Usain Bolt from Jamaica blew away the field and won in a world-record time. However, I couldn’t help but think how fast he actually could have run, had he not coasted at the end and looked around at his competitors. His record will be broken one day, but we’ll never know how fast he could have run that race. 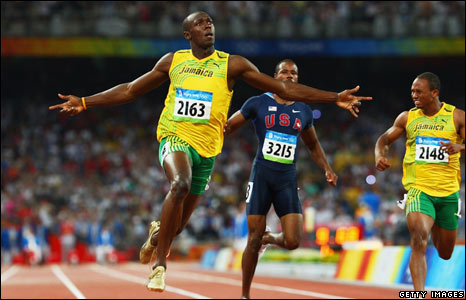 I agree with Mr. Mackay this was a difficult win to get excited about. There was truly something more spectacular left in the tank.

In the end, intensity always wins. Whether you end the race, your project, or your business in the lead you will know you finished without coasting.

And more often than not, that will continue to move you towards the front of the pack, until you are finishing first.